rendezvous at the bluebird 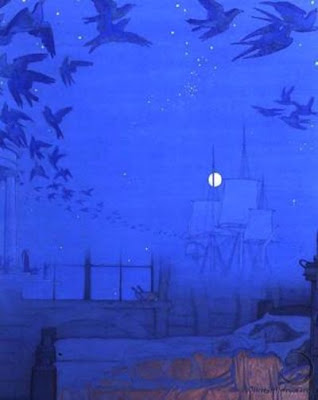 
Alex went to sleep and he dreamed he was wandering the streets of an uncertain city. The twilight had fallen. High above the chimneys and the streetlights, appeared a silvery moon. Suddenly he began to recognize some of the places: a small café, a park where he had often played, a corner of unhappy remembrance.

“Alex, you’ve come at last!” said a young man with spectacles, who was standing by. “I’ve been waiting for a long time. The Bluebird must be overcrowded by now, but we made a reservation, didn’t we?”

Alex remembered that the young man with spectacles was Lewis, his long forgotten friend. The Bluebird used to be their favourite restaurant.

As they entered, Lewis and Alex noticed a curious advertisement taken from a newspaper review, hanging on the doorway:

The Bluebird
Since Long Ago

TRESPASSERS WILL EXIT FED UP

“Is this the good old Bluebird?” said Alex, staring at the walls.

“You see, sir” answered politely a middle-aged man with a foreign accent, “we were tired of the blue, so we painted all in green. I’m Victor – the waiter, the cook and the owner.”

“You don’t have many customers around here lately, do you?” said Lewis. “I suppose nobody’s coming this evening.”

“I beg your pardon, sir? I think you’re wrong. Everybody’s coming this evening.”

And all of a sudden The Bluebird was full of cheerful faces again.

Alex saw the evercharming Mirna sitting at a table, waving her hand. The song ended. After a few seconds, Sinatra was singing Young at Heart again.

“I love this song” said Mirna. “Only it doesn’t seem completely necessary to hear it over and over again. Hello, boys!”

“Mirna, we’re glad to see you. But I don’t think you were invited to dinner, were you?”

“Quite natural. Everybody does so” said Victor offering them la carte.

Alex, Lewis and Mirna gazed upon the pages with curiosity and astonishment:

“Don’t be ridiculous, Victor. I don’t like Spaniards. I mean, they’re very nice and funny but I can’t understand a word they say.”

“Do you need a match?” asked Mirna. “So tell us, Alex. What have you been doing all these years?”

Alex lit the match and he awoke.